Many of the psychological methods of training elite athletes are based on the concepts in Psycho-Cybernetics as well. The book combines the cognitive behavioral technique of teaching an individual how to regulate self-concept developed by Prescott Lecky with the cybernetics of Norbert Wiener and John von Neumann. The book defines the mind-body connection as the core in succeeding in attaining personal goals.

Maltz found that his plastic surgery patients often had expectations that were not satisfied by the surgery, so he pursued a means of helping them set the goal of a positive outcome through visualization of that positive outcome. Maltz became interested in why setting goals works. He learned that the power of self-affirmation and mental visualization techniques used the connection between the mind and the body. He specified techniques to develop a positive inner goal as a means of developing a positive outer goal. This concentration on inner attitudes is essential to his approach, as a person’s outer success can never rise above the one visualized internally. 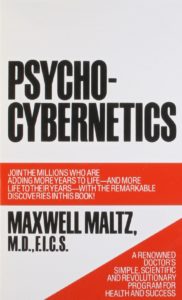