As the Man Thinketh – Law of Attraction

As the Man Thinketh

Home Portfolio As the Man Thinketh
As a Man Thinketh is James Allen’s third book. He described it as “A book that will help you to help yourself”, “A pocket companion for thoughtful people”, and “A book on the power and right application of thought.” It was first published in 1903—most sites incorrectly claim that the book was published in 1902. The first edition was published by The Savoy Publishing Company and was pocket size and daintily bound in cream leatherette with gold lettering.

Man is the creator and shaper of his destiny by the thoughts which he thinks. He rises and falls in exact accordance with the character of the thoughts which he entertains. His environment is the result of what he has thought and done in the past, and his circumstances in the future are being shaped and built by his present desires, aspirations, thoughts and actions. He therefore who chooses and pursues a particular line of thought, consciously builds his own destiny. This the book makes this clear.

This little volume (the result of meditation and experience) is not intended as an exhaustive treatise on the much-written-upon subject of the power of thought. It is suggestive rather than explanatory, its object being to stimulate men and women to the discovery and perception of the truth that— “They themselves are makers of themselves.” 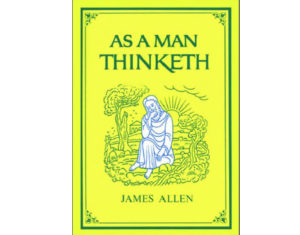